Thanksgiving is over, and the holiday shopping season is in full swing. Hope the holidays were kind to you, and that you Black Friday shopping didn’t leave you with a black eye. For today’s review, I read Kevis Hendrickson’s novel Rogue Hunter: Dark Space. This is the second book in the Rogue Hunter series. You can follow the author on Facebook and on Twitter. 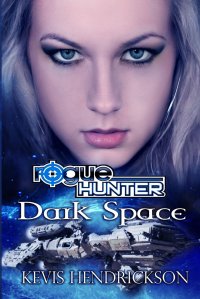 In Dark Space, the second book of the Rogue Hunter series, we follow Zyra Zanr, a beautiful, though dangerous bounty hunter. She is the most famous and feared hunter in the known universe, and as such made many powerful enemies. One who she crossed, a crime boss to whom she owes a considerable amount of money, a loan that she never repaid, put a price on her head. The hunter becomes the prey.

One group of bounty hunters who heed the call to capture the most dangerous hunter is led by a man named Drake. He and his misfit crew seek to find Zyra in the hopes of earning the huge reward offered for her capture.

Outgunned and outnumbered, Zyra is captured, tortured almost to the point of death, and put into a cage, all the while the stress of the mission begin to wear on the crew, threatening to break their already fractured sanity. Their only chance to deliver their precious cargo and receive their reward.

But of course, things never go as smoothly as they should. What follows is a game, the ultimate fight to death, with Zyra battling to escape and survive, and Drake fighting to get his reward while keeping his crew alive. It boils down to who has more skills and resources. In the end you have to discover who is hunting who, and who lives to see another day.

There are several dynamics at play. The most obvious is between Zyra and her captors, who imprison her and torture her, who are willing to hand her off to a most certain death to collect on a bounty. Then there’s the dynamic play between Drake and his crew. We get to peer into their minds, to read what they think of themselves and each other. This is highly dysfunctional crew, that only comes together when their survival is at stake.

At its heart, it’s the hubris of the ship’s captain, and his actions towards his prisoner, that propels the story forward. Not only does he capture her, he makes it personal by his savage treatment of Zyra, to the extent that he almost alienates his crew, and losing some of their respect.

It is his uncompromising attitude, that he will deliver Zyra to the crime boss, that risks the safety of his entire crew. His flat refuses to heed his crews warnings, and he ignores the very real danger that she poses to himself, and those around him. At what cost?

The story itself is well told. It took me some time to figure out the cast of characters, and their place on the ship. Two in particular, Rawls and Rhodes, I had trouble separating, and it would have helped had one of their names been different.

Another character, a woman named Gomez, frequently swore in Spanish. I think it was stilted, and didn’t flow naturally with the rest of the narrative. As a Spanish speaker myself, I question its inclusion. It didn’t fit, and felt that it was at times an unnecessary device to prove she was of a Hispanic heritage. It came across as though it was poorly translated and belabored.

In spite of those few things, I liked the book. I followed along, wanting to know how Zyra would escape, or if she would. I had to know who would survive, if anyone. I was engaged, and thankfully the story was not filled with a bunch of technobabble, whose use sometimes gets in the way of the story. Yes, they are on a space ship in deep space, but it’s only the setting of the novel. The drama comes from the interplay between characters, although the ship does serve the story beautifully.

My opinion is that this book is definitely worth reading, especially if you are into sci/fi and action. There’s enough action to satisfy the casual reader, with blood and gore in the right mix. It’s not over the top, but enough to highlight the danger they are all in. Kevis certainly wrote an entertaining story.