Hallelujah! I survived another week. How did you fare? I hope you made it to the other side intact. Why else would you bless me with your presence, of which I’m extremely grateful.

Before I get started with today’s post, I would like announce the books I have lined up to review next month. I’m so excited I can’t wait to tell you. First up, I have Mitch Lavender’s book, Find My Baby. In it, we meet Zachary, an IT security professional who along with his wife, plan to adopt a child from the Ukraine, Unfortunately, a cyber-criminal with a grudge against Zachary kidnaps the child and holds it for ransom. My review will go up August 4th, but if you want to check it out, you can always follow the link.

The second book is Back from Chaos, by Yvonne Hertzberger. Back from Chaos is the first book of the Earth’s Pendulum Trilogy, which follows Klast, a loner whose destiny it is to heal Earth’s wounds and restore balance to the planet. I will post my review on August 18th.

Now, on with the show. I took a spontaneous trip to the DFW area last weekend to visit my best friend, Amy. Not much happened on the trip, though I did find myself trying to herd an alpaca off the highway last Friday. That was an interesting experience, and a topic for another time.

A fear of heights is illogical. A fear
of falling, on the other hand, is prudent and evolutionary.
~Dr. Sheldon Cooper – The Big Bang Theory~ 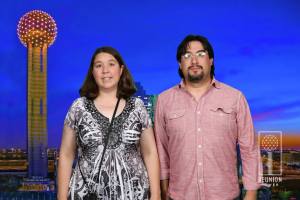 What really made the trip interesting for me had to be the trip to Reunion Tower in downtown Dallas. The tower stands tall at 561 ft, and was completed in 1978. Dealey Plaza, the site of the Kennedy assassination is about 1000 feet away. Reunion Tower boasts two restaurants, Cloud Nine Café, and Fifty Six, an award-winning fine dining restaurant opened by celebrity chef, Wolfgang Puck.

I have a fear of heights. As with most phobias, I know the fear is not logical, but the knowing in no way mitigates the fear. On the drive to the tower, I could feel myself becoming overwhelmed by anxiety. Once we arrived, I balked and I wanted flee the scene. Amy assured me that if I didn’t want to go through with it, I wouldn’t have to. Knowing I was in control allowed me to continue.

The reason for my trepidation is simple. Back when I was in high school, I went on a band trip to San Antonio. While there, we visited the 750-foot-tall Tower of the Americas. I entered the elevator and rode to the top, blissfully unaware of how I would react once we reached the top. 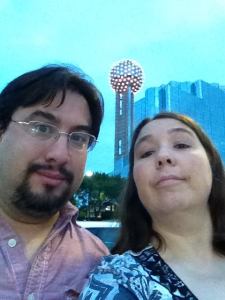 Me and Amy after arriving to Reunion Tower, to meet my doom. Spoiler alert, I survived.

Well, not quite unaware. As we ascended, my panic seemed to rise with the elevation, and when the doors opened, I found myself almost immobilized with fear. I somehow managed to step out of the elevator. I don’t remember much of the experience  other than having to endure the stomach-churning anxiety and the cruel taunts from the other band kids. Never before had I been as happy to be on solid earth.

Fast-forward over twenty years, and the memory of that day come flooding back. I steeled myself against the inevitable desire to flee. I knew I would have to face my fear. If I were to have left at that point, yes I would have felt immediately better, but I would have reinforced my fear. No, I had to immerse myself completely.

After enduring more cruel taunts from the bitch at the ticket desk – which makes me wonder why do people think making light of someone’s phobia is funny? – we joined the line to the elevator. Soon enough we were on our way to the top. In a way, those 68 seconds seemed to last an eternity, but the steady stream of trivia delivered by the elevator operator helped focus my mind on something other than my anxiety. 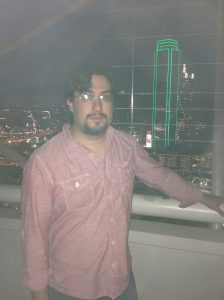 Posing calmly for a photo on the outside balcony of Reunion Tower. Only over 400 feet above Dallas. No worries. Photo by Amy.

With a calming breath, I walked off the elevator, determined not to let my fear get the best of me. I felt the familiar waves of anxiety, dizziness, shortness of breath, but I refused to succumb to the panic. When Amy suggested I take a seat, I kept walking, stubbornly refusing to lose the battle. Soon, I began walking around the floor, looking out the windows. After a few minutes acclimatizing to the height, I opened the door stepped into the open air of the balcony, where I stood briefly at the edge to have this photo taken before retreating to the relative safety of the inside wall.

After returning to the inside of the observation deck, I played around with the interactive screens, watched a ten minute video of the JFK assassination as told by the last surviving member of the Secret Service detail to have ridden in the presidential limo that fateful day. Then it was time to go down. We spent about thirty minutes at the top, but again it felt like an eternity.

Is this the face of a scaredy cat? Um…yes. Yes it is. Behind me is the inside wall of the observation deck of Reunion Tower. Photo by Amy.

The ride down was excruciatingly long. The operator first went up one floor to the café level, then back down to the floor below, before taking the 68-second journey to the ground floor. At one point, I squeezed Amy’s shoulder out of fright, possibly leaving her bruised. (Sorry, Amy!)

But I survived. The ordeal turned out not to be as bad as I had expected. I did experience nausea, light-headedness, and other unpleasant feelings, but I also had a fantastic view of downtown Dallas at night which I enjoyed. I faced my fear, and though I’m in no way over it, I didn’t let it hold me back! I’m also in no hurry to repeat the experience.

Once on the ground, we visited the gift shop, stopped at the Starbucks for a drink, and I was forced to pose for more photos. I hate taking pictures. I’m so not photogenic! I let my nerves calm down before walking back to the car and riding around downtown Dallas, then heading back to the house and a good nights sleep. I survived.

My reward, a hot cappuccino to calm my frayed nerves. Reunion Tower is lighted up behind me. Photo by Amy

1 thought on “Conquering my fear…well, sort of?”