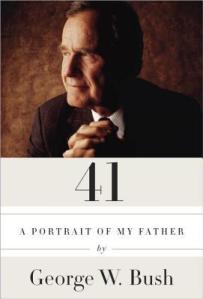 I don’t write much on politics or the lives of politicians. That’s not what I’m about, but that doesn’t mean I’m not fascinated with political figures, especially with the lives of the American Presidents. These forty-four men have assumed a mantle of power and authority that we can scarcely imagine.

The Bush family is only the second family in American history to set a father and son into the executive branch. The other of course is the Adams family, John Adams (March 4, 1797 – March 4, 1801), and his son, John Quincy Adams (March 4, 1825 – March 4, 1829). A book written about a President from his son, who himself assumed the same office had me intrigued. I knew I had to read it.

George W. Bush, the 43rd President of the United States, wrote a loving tribute to the man who shaped his life and set him on a course into business, politics, and eventually to the White House. The question is why? Many others have and will write retrospectives on the 41st President, so why do it? The author himself confessed that the book is not objective but is “a personal portrait of the extraordinary man who I am blessed to call my dad.”

41: A Portrait of My Father is a collection of stories, a narrative of a lifetime of a remarkable man, born into privilege but eschewed the family script to pursue his own story. From the front lines of the War in the Pacific during WWII, to the dusty lands of West Texas, to Houston, D.C., China, and eventually the White House. This isn’t a story of privilege but one of hardships and perseverance.

This is a glimpse of the other side of the man, a man we thought we knew, a man who as President had to endure the constant glare of the camera. This isn’t about the politician, the diplomat, or the business man, this is the story of a man and how he shaped his own course, and in doing do, shaped his families as well.

In writing about him, the author humanizes his father, makes him relatable to the reader. The book is engaging, touching, and poetic. It made me laugh a few times, and I shared in the griefs the family had to endure. While the book may not be objective, it is an honest portrayal as lived by one of the subject’s sons.

It’s hard not to come away from the book without feeling that you know him a little better, and unless you’re a die-hard partisan, you come away liking him. I often wonder what makes a man endure the barrage of criticism just for a fleeting moment of glory a top the pinnacle of world power, and it’s not power for the sake of power, but a sense of duty, a duty he accepted as a fighter pilot which led him to become the Commander-In-Chief.

It’s a great book, and one I highly recommend. Again, there’s no pretense for objectivity, but that fact notwithstanding, it’s a book anyone interested in the lives of our leaders should read. I rate this book 5 stars and you needn’t ask, but I enjoyed the book tremendously.

2 thoughts on “Book Review: 41 A Portrait of My Father”