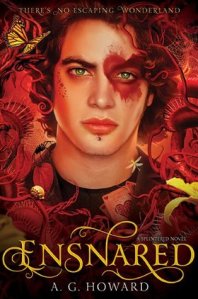 I just bought, and finished A. G. Howard’s final book of the Splintered series, Ensnared, and I have to admit, it was worth the wait. For those not familiar with the series, it is a new take of Lewis Carroll’s Alice’s Adventures in Wonderland, told from the point of view of Alice’s great, great, great-granddaughter, Alyssa Gardner.

It would be all but impossible to review the third book without alluding to the previous novels, so consider this a warning that there will be spoilers, though I promise to do my best to keep those to a minimum. That said, onto my review.

In the final installment of the series, we join Alyssa as she attempts to break into Wonderland. The portals to the realm have shut themselves due to her actions in the previous book, but not without first taking her mother, and the two young men vying for her affection.

To do so, she had to enlist the help of her father, a man who had been taken into the land as a child, but rescued and had his memory erased. Knowing no other way, she begins the quest by restoring to him his lost memories, and in so doing, discovering that his own familial destiny was intertwined with the realm, and therefore to her own.

With her father’s memories restored, Alyssa, along with her father, begin the almost Quixotic quest to attempt to rescue their loved ones, restore balance to the Kingdoms of Wonderland, and restore Alyssa’s rightful place as the Red Queen. Alyssa has to battle not only the spirit of Queen Red, a spirit of malice intent on remaking Wonderland in her own twisted image, but first has to try to bridge the gap between Jed, the mortal she loves, and Morpheus, the Netherling who also has a claim on her heart.

The war for her love is very much at the center of the story. She is by birth a halfling, both mortal and a Netherling. The evil queen takes advantage of her dual heritage and curses her heart, splitting it in two. Her two halves are at war and are in danger of tearing itself as she tried to decide to whom her love belongs, the mortal or the immortal.

That love is key because it also speaks to her love of the human world but also to her desire to be the queen her realm deserves. That love threatens not only her life, but the future of her loved ones, and all of Wonderland. Their fate rests on her making peace with her decision, but also on Jeb and Morpheus coming together to do what is best not only for their kind, but for the woman they both claim to love. Together, they must find a way to make her whole, or risk the destruction of all they hold dear.

What I fell in love with is that this series is very much a story about growing up. If you take away the fantasy aspect, it’s about learning to take responsibility for one’s actions, and that those actions have consequences. It’s a tale of perseverance, that even when things don’t go right, giving up isn’t an option.

I found the story to be mesmerizing, as was Ms. Howard’s imagery of a forbidding landscape, that is at once dangerous as it is beautiful. I loved how lunacy trumped sanity, that only by embracing her own madness could Alyssa come to terms with her power and fulfill the destiny she once tried to forsake.

So, I give Ensnared five stars. It’s a wonderfully written book that took a story that has become part of our popular consciousness and gave it new life. A. G.  doesn’t simply continue Carroll’s story, she reinvents it, making it a wholly unique take on a classic tale. For anyone who loves fantasy, and all lovers of books, I highly recommend that you put this on your reading list. You will not be disappointed.

List of Book Reviews
Next review –  41: A Portrait of My Father
Previous Review – Through Kestrel’s Eyes