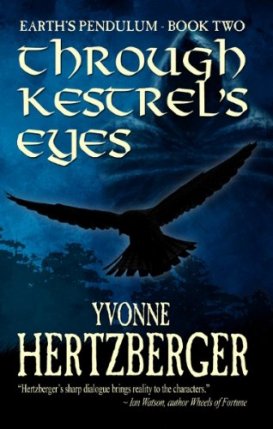 Through Kestrel’s Eyes is the second book of the Earth’s Pendulum Series by Yvonne Hertzberger. I reviewed the first book, Back from Chaos back in August. All the major characters are back, except in this book, the story is a first-person narrative as told by Klast and Bresna’s daughter, a seer named Liannis.

Liannis is a young woman, newly come into her responsibilities. Chief among her abilities include the gift of foresight, usually given to her in a series of dreams from Mother Earth, and the ability to truth-tell, which she uses if a prisoner needs to be interrogated, of if someone’s loyalty is called into question.

The seer works for Earth, a goddess personified, who uses Liannis as an intermediary to maintain balance. Earth’s ability to provide for her inhabitants is strained by man’s refusal to live in harmony with one another. War, and man’s desire to subjugate a defensless populace, causes Earth to suffer, which in turn leads to drought and famine.

The book is roughly a two year span, between Liannis’ taking up the mantle of seer from her mentor, and the trails Bargia, her home, faces with the neighboring demenses, (what we would think of as a kingdom.) Though she has pledged no allegiance to any lord, having grown up in Bargia, she works primarily with Lord Gaelen and his allies.

Trouble comes to Bargia on two fronts, first from Lieth, where a weak lord is disposed and a ruthless despot assumes power, abusing the populace for his own enjoyment. Then from Gharn, where the lord has also been deposed but Dugal, his heir, seeks to reclaim his birthright. Lord Gaelen must choose where to focus his attention, Bargia not strong enough to fight two separate battles, though both threaten not only Bargia’s safety, but Earth’s ability to provide.

Through the conflicts, drought plagues the lands, putting further hardships on the land, making achieving a lasting peace all the more important. Liannis works tirelessly, even putting not only herself in danger, but also her loved ones, all for the sake of Mother Earth. At risk is not only her home demense of Bargia and her allies, but the survival of all mankind.

First let me say that trying to summarize the book is almost an impossible task, as there’s so much going on, with a cast of characters that come together to create a rich and complicated story. At its heart is our seer, Liannis, aided by a young man Merriest, who had the misfortune of losing a leg in his first battle.

There’s also the added dynamic of the seer and her parents, her father Klast, Gaelen’s most trusted adviser and spy, and Bresna, Lady’s Marja’s best friend. Woven into is her familiarity with the ruling family, and her duty to remain impartial for the service of Earth.

The story is much more about about the necessary evils a country must fight in order to achieve a lasting peace. It’s about the suffering her people endure, and how dependent the population is to her leadership for their survival.

But for me, the crux of the book is the Liannis’ personal relationships, not only with family and friends, but all those she serves. There’s a depth of warmth that is at once real and moving. She cares, and through her made me care. She loves, and I came to love her and the rest of the characters as well. The added friction of a potential romantic attachment, one that she believes to be taboo, is familiar and should resonate with everyone.

Through Kestrel’s Eyes is a well-written novel, as is the rest of the series. It moved me to laughter and to tears. I loved it so much that I immediately read the third -though you have to wait for my review – and I immediately wrote the author to tell her how much I loved her books.

It should be no wonder that I should rate this book highly, 5 out of 5 stars. Even after reading it for a second time, I couldn’t contain my emotions, my eyes tearing up from Liannis trials, that I had to stop often to dry them. It isn’t to often that a book does that to me. I cannot recommend this book enough.

Yvonne Hertzberger
Back from Chaos