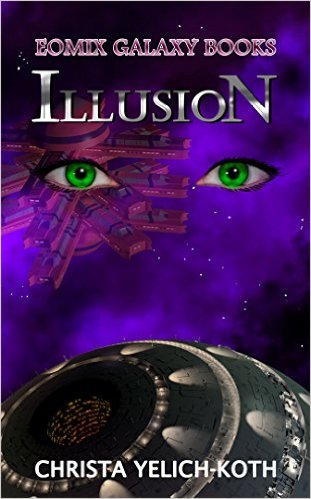 Imagine waking up in an unfamiliar room, not knowing where you were or even not knowing your own name. This is the predicament our heroine finds herself in to start the book, Illusion, by Christa Yelich-Koth. Daith Tocc, a young woman and daughter to Jacin Jaxx, has been kidnapped, her mind erased, by Commander Trey Xiven, once second in command to her father.

Trey, trying to maintain the army her father established in order to impose peace in the galaxy, is on a mission to bring order to the chaos that erupted after Jacin’s death. Hoping his offspring may possess their father’s mental gifts,  Trey searched until he located Daith, wiping her memory, and testing her in the hopes that he could use her for his own ends.

The commander brings in his estranged brother, Dru, to test and guide her, to hone her skills. Though he’s uncomfortable with lying to Daith about her true identity, he’s drawn to her, the first woman that has interested him since his wife’s death. He’s torn between familial bonds, and his growing attachment to his patient, struggling to maintain some semblance of clinical detachment.

But with Daith’s power growing beyond what they had imagined, keeping her identity a secret from her becomes more difficult. Trey resorts to desperate measures to ensure she stays under his control, and no one’s life is safe while he attempts to bring peace back to the galaxy. He believes everyone is expendable, a small price to pay in order to free worlds from war, but will he be able to sway Daith? Will she stay and give up her hope of discovering who she really is?

When I started reading this book, it wasn’t with any sense of expectation. It was only because I agreed to read and review it for the author. It quickly became apparent that the book was well thought out, well-written, and was actually gripping. I became immersed in her story, needing to know what came next, needing to see what exactly Trey’s plan would be, and if Daith would regain her memory.

Illusion is a book whose antagonist believes himself to be the hero, while he plots and schemes, having no trouble killing those who stand in his way, including his own crew should they disappoint him in any way. He’s a tyrant rather than a leader. Daith, however, is a mystery to herself, discovering the truth of her powers as she is guided by the lies of a man who doesn’t care about her, except by how she could be of use to his plans.

As as sit here writing this, is occurs to me that Illusion is one of the better books I’ve reviewed. I read until I could no longer stay awake, and finished it as soon as I could. My only complaint is that I have to wait until the next book to come out to know what happens next. I came to loathe Trey while I rooted for Daith – and to a lesser extent, Dru – to be able to free herself from his grasp.

Christa succeeded in creating an interesting story, one that I wholeheartedly encourage everyone to read. It’s definitely one of my new favorites!