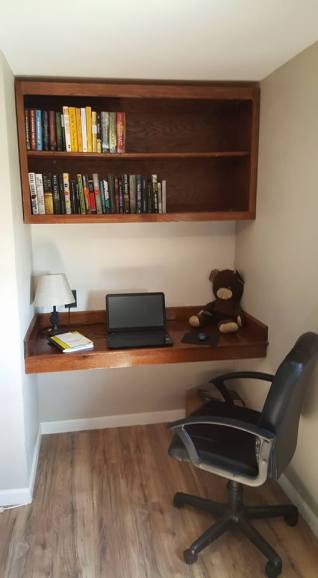 The countdown has begun again! In less than a month, National Novel Writing Month begins. NaNoWriMo is a contest where the goal is to write fifty-thousand words in a month. That’s 1666 words a day. Easy peasey. Sort of.

That is my future, but lately I’ve been working on other projects for myself. I recently completed a built-in bookcase that hangs above my desk. It’s mostly completed, but there are a few things I need to finish up before I can say I’m 100% done with it.

Next, I have to sew a costume for a friend’s Halloween party. I decided, in my insanity, to go as Severus Snape. The problem is that I can’t find a suitable costume. My solution, if you haven’t guessed, is to make my own.

That’s where creation and ingenuity come in. Although I did take Home Economics back in high school, and part of the curriculum was to learn to sew, it has been more than two decades since I took the class. Will that deter me? Hell no! I see it as a challenge. Bring it on!

The complication is that I cannot find a pattern to use, and that’s where ingenuity comes in. I don’t know how to make my own pattern, so I went to Jo-Ann, searched through their catalog, and I came up blank. The closest thing I could find was a costume jacket similar to the one Alan Rickman uses, but not quite. I decided to buy the pattern, knowing that I’ll have to make a few alterations to the pattern in order to make it. 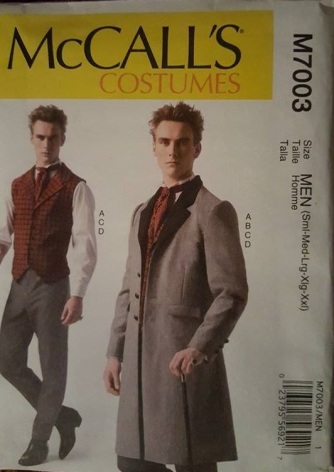 Found this a Jo-Ann in Lubbock. Not exactly what Snape wears, but close enough.

I’m actually rather excited for the project. I haven’t sewn in years. This’ll be my first since high school, and the fact that I rather loathe costumes isn’t enough to dampen my excitement. Actually, I can’t wait to get started. It’ll be interesting to see if I can pull it off. I have less than three weeks to actually do it. More than enough time for a tailor to make one, but I’m no tailor, no seamstress. I have almost no experience in something this ambitious. I also have to make the cloak, but that’ll come later.

I also have another project in mind. I want to build a couple of nightstands, again out of red oak, to match my computer desk and book case. I’m thinking about building a bedroom set as well, but one piece at a time. I’m not that skilled at woodworking, but I think I’m getting better. Experience really is the best teacher.

I still have my goal of publishing a book, but that’s only part of what I want to do. I like the act of creation, the art and the science of bringing into existence something that was not there before. It’s almost an alchemical transformations, bringing in several elements, combining them, and giving life to something new. Whether it’s a short story or novel, whether it’s cooking or baking, or even woodworking or crafts, it’s a subtle magic we can all perform.

NaNoWriMo is a great opportunity to give yourself permission to lose yourself in writing, but it shouldn’t be the only time to let your creativity flow. There’s all sorts of things I want to build and create. In this, Adam Savage is almost like a mentor, and I look up to him. You should check him out on the YouTube channel Tested, where he builds and creates anything and everything. While I don’t have his level of skills and ingenuity, why should I let that keep me from doing what I like?

2 thoughts on “On creating”