I celebrated my birthday last week by working until midnight. How did that happen? Where were my friends and the partying and the booze and the loose women…? Oh right, I’m getting old and I’ve never had friends and parties with booze and loose women. But on the bright side, I’ve never had to go to the doctor to check out a weird “rash”. 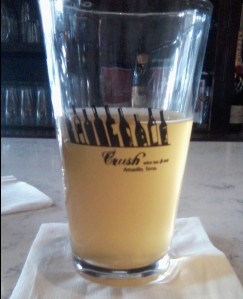 I’m not being entirely honest. The anniversary of my expulsion from the womb was indeed spent at work, and I was scheduled until midnight. However, I finished my work early, begged to leave an hour early, and shamelessly exploited the fact that it was my birthday to get the hell out of that hell hole. And it worked fantastically.

My girlfriend took me out a couple of days later on Saturday to celebrate, which was nice. Went to mass first, before going to a little place in downtown Amarillo called Crush Wine Bar & Deli. I liked the atmosphere, and they had a great selection of beers but an unimpressive selection of food. I had a burger, which tasted okay, but it was dense, dry, and hard to eat. I think the guy next to me would disagree since he was practically orgasming over his burger. Made me feel all icky they way he gushed to his server. The truffle fries, however, were exquisite. I’d go back for those fries. Also the beer and wine.

Next, after a brief layover at her apartment to wait for the night to fall, we headed out to Skooterz. Before I go on, I don’t go to clubs. I hate clubs. They’re noisy and filled with people, oft times people who make poor choices, and I just don’t like crowds, but since it was my birthday and my girlfriend wanted to see a band, we went.

Finding the place was a nightmare, but eventually we did. We got inside a little before ten, found a place to sit, and the nice server brought us a couple of beers, which they made me pay for. The band, Feed the Machine, did an outstanding job rocking the kind of music I actually listen to. After a couple of drinks I began to mellow out and I found myself actually enjoying myself, but since I drove I had to limit my consumption. Ah, the joys of being a responsible adult.

Finished off the night at IHOP for some pancakes before making the hour drive home. So maybe I didn’t have the crowds of friends, and the obligatory party with drinks and girls, but I did have a great time with a fantastic person who laughs at my stupid jokes and generally puts up with my idiocy. All in all, Saturday has to be one of my better birthday celebrations, belated observed. Though next time, I want to go with a group of people, and have them drive, so I can sit back, mellow out, without having to worry about driving. Oh, I and forgot to eat some cake. Damn!