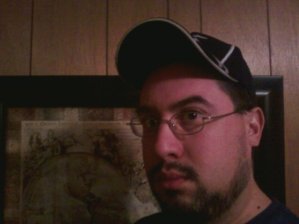 Late last month, I let a milestone pass unobserved, not because I meant to, but rather because I completely forgot until after the fact. Three years ago last month, my then wife chose to runaway to move in with some guy she had never met in person, a guy she met online and talked on the phone behind my back.

I almost posted about it the next day but chose to let the past stay in the past, and to stop dwelling on things that I should forget about. And I did, until yesterday, when I logged onto my WordPress site and saw a notification that it had been three years since I had signed up for this blog, although I wouldn’t post my first blog, an observation about trying to find myself after a break-up, until the next day.

Me today, playing with my Kindle. I’m not so good with the smiling, but I’m actually in a good mood.

I never thought I would still be on here, let alone with my own domain name, three years on, but I’m still here. I’m not posting as often as I had been, and I’m no longer obsessed with my stats, as in I want more page views, but I’m still here. My focus no longer is on my poor, sorrowful self. Bygones are just that, and I’m focusing my energies elsewhere.

So, in honor of my three-year anniversary, I want to share a few good things to have come out of the debacle of 2011.

Sure, I few bad things have happened as well, but that’s life. The biggest change is that I’m working to see the good instead of dwelling on what’s bad. I’m looking to the future, and working to make that dream a reality. I have not artificial deadlines anymore. I’m trying to be realistic with myself, pushing myself to met my goals without imposing too strict a time frame. Maybe this time next year, we’ll revisit this and see how I’m doing.